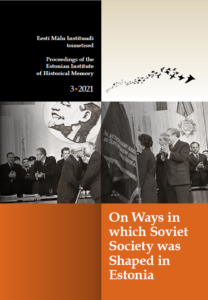 Proceedings of the Estonian Institute of Historical Memory 3 (2021): Propaganda, Immigration, and Monuments. Perspectives on Methods Used to Entrench Soviet Power in Estonia in the 1950s-1980s

The 3rd edition of the Proceedings of the Estonian Institute of Historical Memory examines various methods used in establishing and shaping the Soviet social order, including information and migration policy, putting together a pseudo-assembly of people’s representatives, and propaganda in memory politics. The latter manifested in the destruction of monuments from the period of Estonian independence and in the erection of new monuments. The selection of articles examines the inner workings of the Soviet regime’s ideological manipulation, an inseparable part of which was the demolition of the social structure and consciousness of Estonia’s independence period, and replacing it with a social order shaped in the spirit of Soviet doctrines.

The publication will be available soon at Tartu University Press. Proceedings of the Estonian Institute of Historical Memory 2 (2019): “Priboi” Files: Articles and Documents of the March Deportation of 1949

The March deportation, or Operation Priboi, was USSR’s most extensive deportation operation of the post-war years, affecting all three Baltic states. The aim of the operation was to eliminate resistance to collectivisation in rural areas. The book contains a complete Estonian translation of the Estonian SSR’s Ministry of National Security’s “Priboi” file, as well as other documents related to the operation. The book also includes seven academic articles that examine various aspects of the March deportation. Proceedings of the Estonian Institute of Historical Memory 1 (2018) = Eesti Mälu Instituudi toimetised 1 (2018): Sovetisation and Violence: The Case of Estonia.

A collection of articles by the members of the Institute’s research team and historians associated with the Institute. The book focuses primarily on the most violent period of the era of Soviet occupation, i.e. the second half of the 1940s and the early 1950s. The articles examine political terror, the policies of the Soviet Union and some theoretical issues. 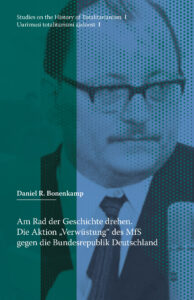 The book’s manuscript was the 2021 winner of the Estonian Institute of Historical Memory’s international research competition in the category of unpublished papers. The book has been published in cooperation with University of Tartu Press as the first book in the Institute’s new scholarly series Studies on the history of totalitarianism. Indrek Paavle. At the Will of Power. Selected articles

Indrek Paavle (1970-2015) was one of Estonia’s most prominent historians, who tragically perished in 2015. Paavle’s good friends and colleagues have collected 22 of his academic and popular writings from 1996 to 2015 into a memorial collection. The latter form the most important and best part of his research. The book also contains new material for Estonian readers, as some studies that were first published in English, have now been republished according to Estonian manuscripts.

The collection is helpful for historians as well as for anyone interested in recent Estonian history.

The book can be purchased online from the National Archives of Estonia, Apollo and Rahva Raamat. Memorial to the Victims of Communism

On 23 August 2018, the memorial to the victims of communism was opened in Maarjamäe, Tallinn, merging memories, history and architecture. In two years it has become an inseparable part of our commemoration culture. The memorial received the Structure of the Year award in 2019 as well as the Good Public Space award from the Cultural Endowment of Estonia.

The profusely illustrated album features various views of the memorial, taken by photographer Arne Maasik. The book also gives a short overview of the crimes committed by the communist regime in Estonia as well as of the development of Maarjamäe commemoration area. The communist Soviet Union (in Estonia 1940-1941, 1944-1991) imprisoned innocent people on ideological grounds in the historic Patarei fortress. Patarei is one of hundreds of such places around the world. The exhibition area “Communism is Prison” introduces totalitarian ideology and its implementation, warns against the dangerousness of such ideas and reminds us of the value of human dignity and freedom.

The booklet is available at the Patarei prison exhibition area. Before Tito: The Communist Party of Yugoslavia during the Great Purge (1936–1940)

The manuscript won the Estonian Institute of Historical Memory’s international research competition in 2018 in the category of unpublished works and was released in cooperation with Tallinn University Press in the series ACTA Universitatis Tallinnensis.

The publication is available at Tallinn University Press.

Publication is not available. Historical memory versus communist identity: proceedings of the conference “The shaping of identity and personality under communist rule : history in the service of totalitarian regimes in Eastern Europe”, Tallinn, 9-10 June 2011.

Book is available at OAPEN. The power of freedom: Central and Eastern Europe after 1945 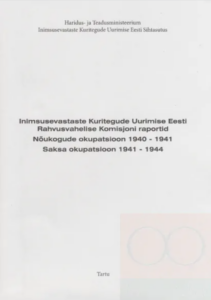 Estonia since 1944: reports of the Estonian International Commission for the Investigation of Crimes Against Humanity. Estonia 1940-1945: reports of the Estonian International Commission for the Investigation of Crimes Against Humanity.